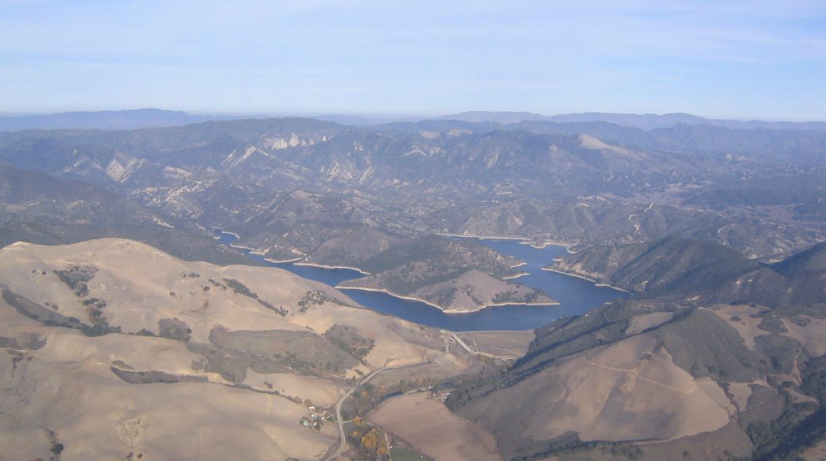 Lake Lopez is located on the Central Coast in California above the city of Arroyo Grande. Its a smaller lake with a total surface of about 1.5 miles.
Its very close to where I live and I haven’t done any fresh water sailing, so I took my boat up this last weekend for a dip.

The lake is shaped like an intestine and is formed by a man-made dam that provides water flow control to the coast below.

It was beautiful and green when I was there this weekend due to the recent rains.

The Marina is in the lower right hand portion of the lake, off on the small finger that points south.
There are two docks to launch off at.
I was the only sail-only boat out yesterday, plenty of button-pushers though.

Wind was expected 10-20kts. I was hoping it didn’t hit too much at 20kts due to my sailing experience.

I was with a group of inexperienced sailors, so they became my crew. I had 3 other guys on the boat with me; Abe, Ross, and Matt. 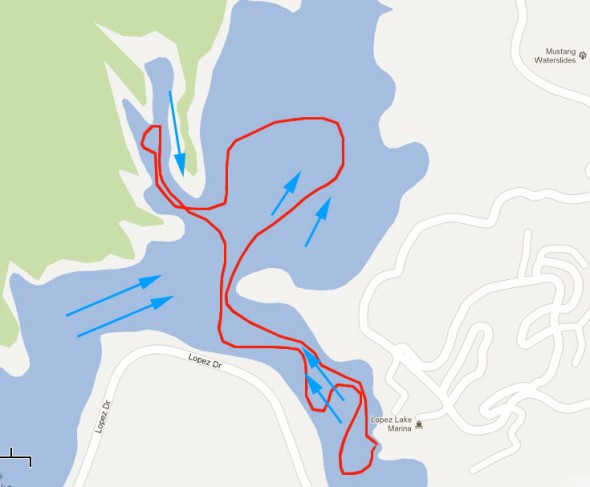 Our first trip took us from the Marina out into a VERY windy spot where the three winds converge, so called ‘the devils [insert expletive]’.
We shot across this windy area pretty quick and lost Abe overboard due to some excitement on his end.

We then cut up and around in the bay area and tacked back. I had heard that lakes like this were for more advanced sailors because the fingers can create converging and inconsistent wind. The wind was relatively consistent out in the larger bay area pushing us north. It was probably never in excess of 12kts out there. 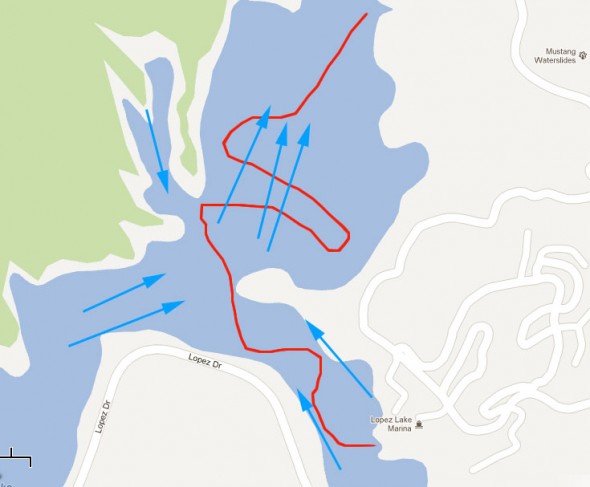 The next run after lunch was to be a little calmer and shorter run in the Marina with my wife (Heather), our puppy (Hansel), Mel and Matt. Since Matt was good with the jib, he took jib and i took rudder and main sheet.

We headed out and the wind was slightly more consistent, but overall very pleasant. Most likely in the 8-12kts range. Enough to keep us moving exactly where we wanted to go.

When we tacked off the eastern shore and the wind went crazy. We were trucking along and were able to make a tack back on the western shore but weren’t able to take the boat back south and the wind took us FAST up north to a beach boat launch. The wind had to be up in the 20kts range.
Things got too wild and we unfurled the jib and let it free. I tried to cut us via rudder back east with no job but it was too hard on the main and almost flipped us. We were out of the water at a 45 angle- everyone was standing up perpendicular to the boat.
I was very concerned for my Hansel who can’t swim!
Luckily there was a dock up that way and we happened so see some friends from in town who were lounging around on the beach- they helped us get on shore and all that.

There are a few lessons I learned:

On that last one- I should have attempted to do a 360 turn rather than a 90 turn to get us back into the headwinds to get back to the marina.

We all had a great time, even though the 2nd trip was extreme. It was a great way for me to get familiar with handling my boat with a full crew and the boat in high winds.

Heres a reminder of another sailor that this voyage brought to mind:

When a gentle southerly breeze came up, they weighed anchor, thinking it would be smooth sailing. But they were no sooner out to sea than a gale-force wind, the infamous nor’easter, struck. They lost all control of the ship. It was a cork in the storm.We came under the lee of the small island named Clauda, and managed to get a lifeboat ready and reef the sails. But rocky shoals prevented us from getting close. We only managed to avoid them by throwing out drift anchors.

Next day, out on the high seas again and badly damaged now by the storm, we dumped the cargo overboard. The third day the sailors lightened the ship further by throwing off all the tackle and provisions. It had been many days since we had seen either sun or stars. Wind and waves were battering us unmercifully, and we lost all hope of rescue.With our appetite for both food and life long gone, Paul took his place in our midst and said, “Friends, you really should have listened to me back in Crete. We could have avoided all this trouble and trial. But there’s no need to dwell on that now. From now on, things are looking up! I can assure you that there’ll not be a single drowning among us, although I can’t say as much for the ship—the ship itself is doomed.

“Last night God’s angel stood at my side, an angel of this God I serve, saying to me, ‘Don’t give up, Paul. You’re going to stand before Caesar yet—and everyone sailing with you is also going to make it.’ So, dear friends, take heart. I believe God will do exactly what he told me. But we’re going to shipwreck on some island or other.”

On the fourteenth night, adrift somewhere on the Adriatic Sea, at about midnight the sailors sensed that we were approaching land. Sounding, they measured a depth of 120 feet, and shortly after that ninety feet. Afraid that we were about to run aground, they threw out four anchors and prayed for daylight. Some of the sailors tried to jump ship. They let down the lifeboat, pretending they were going to set out more anchors from the bow. Paul saw through their guise and told the centurion and his soldiers, “If these sailors don’t stay with the ship, we’re all going down.” So the soldiers cut the lines to the lifeboat and let it drift off.

With dawn about to break, Paul called everyone together and proposed breakfast: “This is the fourteenth day we’ve gone without food. None of us has felt like eating! But I urge you to eat something now. You’ll need strength for the rescue ahead. You’re going to come out of this without even a scratch!” He broke the bread, gave thanks to God, passed it around, and they all ate heartily—276 of us, all told! With the meal finished and everyone full, the ship was further lightened by dumping the grain overboard.

At daybreak, no one recognized the land—but then they did notice a bay with a nice beach. They decided to try to run the ship up on the beach. They cut the anchors, loosed the tiller, raised the sail, and ran before the wind toward the beach. But we didn’t make it. Still far from shore, we hit a reef and the ship began to break up. The soldiers decided to kill the prisoners so none could escape by swimming, but the centurion, determined to save Paul, stopped them. He gave orders for anyone who could swim to dive in and go for it, and for the rest to grab a plank. Everyone made it to shore safely.