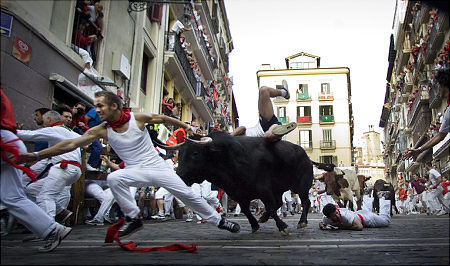 It was often that he found himself waking up with this bright light, the imagination, peering into his bones. It was often that he equated it with the American Dream.  At 14 he had seen the streets of Spain covered with the blood of the bulls and he thought he could never escape the horror. His parents had packed the bags and booked a ticked on Pan-Am. The airplane left from Los Angeles to Phoenix and then to Miami, finally over the water- tåhe glistening water- to Spain.

It was as he would assume, the adobe buildings reminded him of home, but the people were different and the colors of the sky were all off. His parents large blue suitcase with the oversized zipper troddled along behind him with a “thump” at every stone in the road. The heat played tricks on the metal buttons on his shirt, he thought it reminded him of a book his father used to read aloud to him. His father used to sit and read to him, over and over, some scene from a book about a man and a broken mirror, it was some book about an Arab, a beach and a man with a gun. Sometimes when he saw the light and the sun he remembered his father’s eyes through the glasses, reading this story to him.

The night came, the hotel, warm air, the smell of dust and stone. At night the color would change from a dim fade to the bright and bold colors that you see in the windows of the comic book shops in Culver City. His parents had left for a drink and he was told to, “stay close, and don’t leave the hotel room unless you need assistance.” I had brought my favorite book about martians and a man named John Carter. The book seemed dull with the color bleeding through the faded hand-stitched window curtains. The curtains reminded him of his grandmothers house, with her old veiny hands and the fabrics strewn about.

I didn’t leave the hotel that night. I wanted to see the bulls, I wanted to be a part of something that had the allure of adventure, like John Carter.

The next day the bulls lay dead and I stood over near an adobe building with cracked walls. There  was a lizard with a green body that kept looking at me from a patch of weeds on the ground. I saw the bulls in the street, the men had run from them. People had killed the bulls with rods.