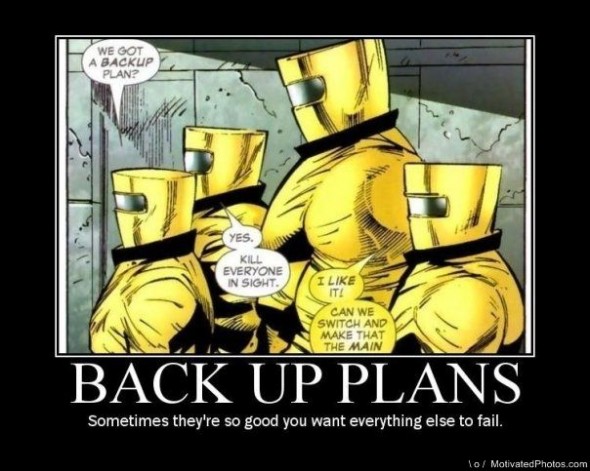 Last week, a server developed massive amounts of corruption in the middle of the night. Luckily my disaster contingency plan was in place and I had the server rebuilt in one hour. It pays to have a backup plan.

What was my plan?
I had backups offsite, I had backups on redundant arrays spanning lengthy timeframes back. I was also running this in a virtual box.
This specific machine was an exchange box, and DC.
It was 9:15am and a quick restore of the system to a backup that was 3 hours old. Due to my planning, the exchange information store and all relevant data that could have been changed by users was stored in a separate partition.
By 9:45 the VM was rebooted, restored to the three hour old image, and not a soul even could detect a disturbance in the force.

Again, it pays to plan ahead. There was a similar failure about three years ago at the organization, before I was there. The VP of finance recounted that it took 6 days to rebuild. Six days? Someone was not on top of their game. This is why its important to have a dedicated IT team that makes the right decisions.